Dining Around Town - by Gregg Pill 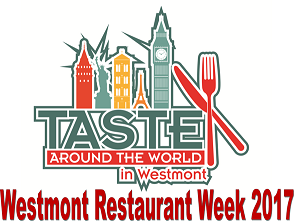 So nice to see winter in our rear view mirrors….hopefully, bbq and patio dining is just a month or two away!   But before we get there, the first Westmont Restaurant Week debuts from March 9th – 19th!

Reader’s Choice Awards  - Launched in 2016 with 27 categories and over 250 voting options, the Suburban Life Reader’s Choice 2017 returns with over 300 options in 28 categories from ice cream to burgers to fine dining to patio dining and many more.  The link will be active from March 9th – 29th and can be found at www.westmontchamber.com.  Winners are announced at the Westmont Annual Awards evening on April 20th at the Hilton.  Vote early and often, up to once per day.  Last year we had over 8000 votes cast and my goal is to break that number!

Easter – April 16th – A spectacular Easter Brunch - Bringing Back Family Traditions, will be hosted by the Oak Brook Hills Hilton in their newly renovated Grand Ballroom.  Featuring farm-to-table ingredients, family photos, a visit from the Easter bunny and lots more, this elegant brunch is offered by reservation only for seatings at 11am and 1:30pm.
http://www.oakbrookhillsresortchicago.com/dining/easter-brunch.htm

Mother’s Day – May 14th  - Look for several of our Westmont restaurants to step up to the plate including Bakersfield, Absolutely Delicious, Vincitori, Amber and the Hilton at Oak Brook Hills.

Lion’s Club Pancake Breakfast – How often can you walk to a pancake breakfast in a beautiful park setting?  At least once a year if you partake in the Westmont Lion’s Club All-You-Can-Eat Pancake Breakfast as part of the Race To The Flag 5K Walk/Run benefiting People’s Resource Center.  Held Memorial Sunday as not only part of the race but also part of the Red, White and BBQ 3-day festival.  This year, it will be on Sunday, May 28th.  You don’t have to be a race attendee although race participants receive a free ticket as part of their entrance fee.

Urban Legend has changed its name to Myths and Legends.  Seems a west coast winery had already taken the name some time ago.  Everything else remains the same with the tap room open Tuesday through Sunday.  Wednesday night features live entertainment and food truck or two.  Visit the only brewery in Westmont and try the sampler!  Go during Restaurant Week and enjoy two samplers for $10!

Up and Coming:
Johnny’s Blitz – A new sports themed restaurant will open in downtown Westmont in the space formerly occupied by LaLaLi Patisserie.  Menu plans call for gourmet burgers as well as several other options.  With construction, expect an opening in late Spring.
The former site of Pompei and numerous other dining establishments is once again on the market as the deal for Pizza Bacci fell through.

Up and Running (last six months):
Dolce’s Restaurant has changed ownership hands and is now known as Dolce’s Restaurant & Wine Bar.  Located at 15 West Quincy, across from the train station.  An expanded menu will be available under the guidance of partners from Neat Kitchen + bar.  Hours are expanded to Tuesday – Sunday.

Big Boss Westmont – has opened at 677 North Cass Avenue in the shopping center north of Jewel.  Featuring a large menu of trans-Pacific dining options, this is a 2nd location with the original being in Forest Park.

Gone But Not Forgotten:
Maxwell’s Red Hots – Landlord issues closed this restaurant as a main water line broke and repairs will not be made.    It’s never good when outside and beyond your control issues force your business to close.